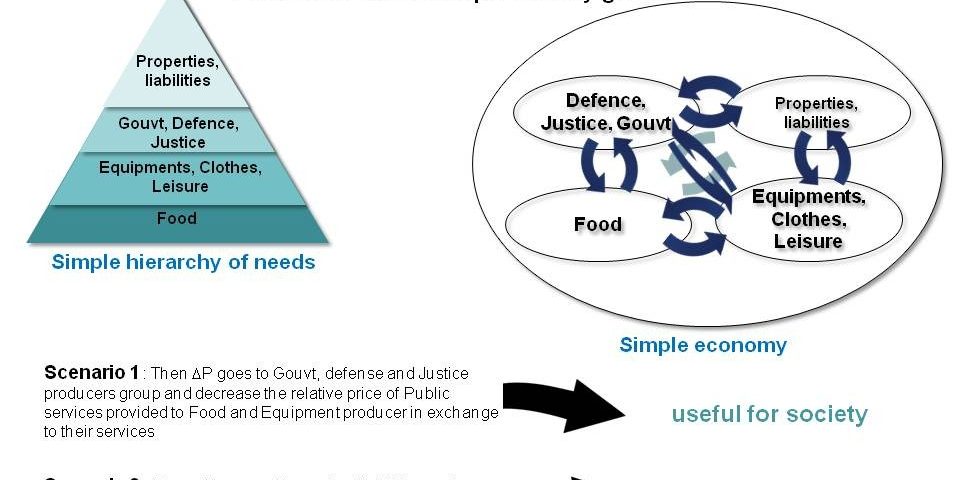 By now, word Innovation flourishes often on political and managers lips as many entrepreneurs dream to transform an idea in gold. This is the modern rush. Looking at carefully, allows to discover soon that the race is likely to have few winners against many loosers. If United States seems to come close to win, among loosers lay old Europe. Are old fashioned countries showing so much resistance to change that it will anihilate all innovation benefits ?

To show what is happening, let’s consider a simple economy of four producer groups :

Let’s suppose that this order is matching the order of needs and all production cater everybody for what he needs.

There no money, this is a barter economy everybody gets his goods exchanging his own production for all his needs.

At this this moment, economy is at equilibrium.

With no productivity growth, DP is scattered evenly into each producer group to maintain equilibrium. Each production growth evenly.

If productivity has grown enough to cover all needs of DP,  this new population could be added to group 3, that is Governement, Defense and Justice producers group, for society services enhancement. It will decrease the relative price of Public services provided to Food and Equipment producer in exchange to their services. In the same time increase of food proction du to productivity growth would have decrease their price. So equilibrium is maintained.

Another scenarios is that DP form a new group of producers which provides innovations. Then, DP gets all suprluses covering his needs in exchange to innovation goods and services.

In this process, creation destruction happens inside each production group, somme part of production decrease as some other increase according to change of needs, for example inside food production, when people taste change.

Some readers would say that innovation is what fuels productivity. By the way, no innovator producers group has to be considered. In this, they are referring to the current situation where automation technologies have allowed productivity gains on old fashioned goods and services, but have not still brought forefront disruptive innovations which imply new goods and new services.

This short story would like to demonstrate that, in spite of today technology, disruptive innovations would not happen without great productivity growth. Disruptive innovations could be automatic car driver, allowing to increase car flows on roads, and change these infrastructures usage and benefits, it could be fuel cells allowing to change the way to distribute power in machines, a lot of little engines well located are better that a big one centalized. They could happen in services, for example customization could lead to propose home personalized restauration services which may lead mothers to abandon totally home cooking and dedicate spare time to new activities. They will change the way we live and we work.

This story shows that Europe with recurrent weak growth and its fear of scale economy resulting in more desoccupation is likely to stay behind for a long, unless it changes. Some readers may say that crisis has not been enough strong in Europe to pull change, according to this point of view softening crisis impacts have not been a great idea.

It shows as well that we have to promote more and more digitization of business to make disruptive innovations finally happening.

One thought on “No disruptive innovation without great productivity growth”